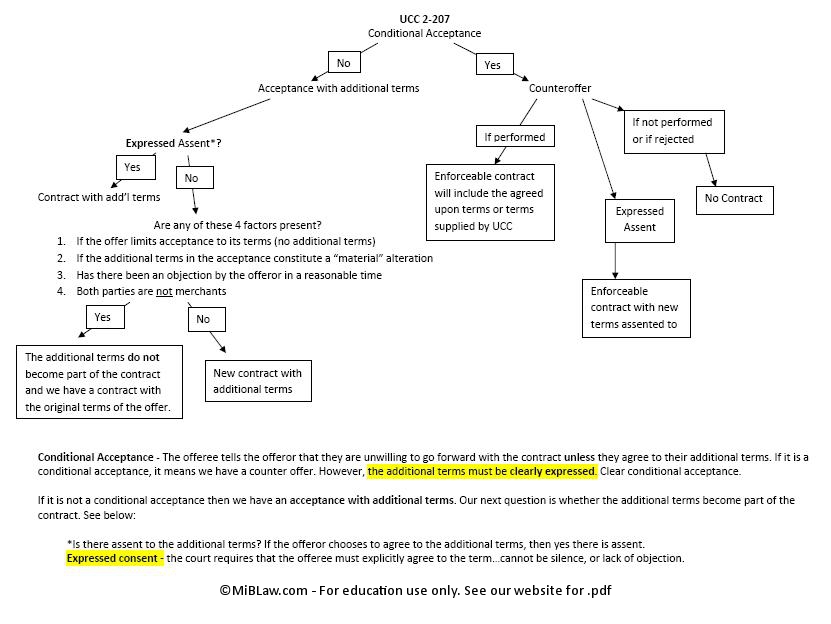 When it is not exactly clear what parties agreed upon but it is clear that the parties intended to agree, a court must determine what terms apply. If various forms have been sent back and forth between the parties common law only gives us two options to apply to the forms: Offer and Acceptance or Counteroffer. The Uniform Commercial Code (UCC) gives us a third option: acceptance with additional terms.

This option can be found in the UCC 2-207. The goal of 2-207 is to determine which terms apply from the contract negotiation; however, the language of the section can be very confusing and hard to follow. This UCC 2-207 flowchart should be helpful in navigating this section of the UCC.

For an example of the Battle of the Forms in action see Brown Machine, Inc. v. Hercules, Inc.

Issue: Under the UCC, did the defendant breach a contract when he refused the last of three deliveries because he believed it was being delivered late?

Key Facts: Defendant had several telephone conversations with William VanAs, a broker for the plaintiff. During these conversations, VanAs informed the defendant about the availability of 5000 metric tons of steel that could be shipped during September-October, 1974 and defendant informed VanAs that he was interested in purchasing 1000 tons of this shipment. VanAs recorded the terms of this transaction on a worksheet and relayed the information to the plaintiff. In July, 1974, the plaintiff mailed the defendant a sales form confirming the sale of 1000 metric tons which shipment from Europe during Sept-Oct, 1974. The plaintiff then ordered the 1000 tons of steel from Europe. The defendant did not sign or return the plaintiff’s sales form but prepared and mailed his own purchase order form (which contained the same quantities, shipping dates, and minor specification changes. This was never signed and returned by plaintiff. The steel came from Europe in three separate shipments. The first two shipments were received and paid by Advance. The last shipment arrived in late November which the defendant rejected because of “late delivery.”

Procedural History: None because the case is in the District Court (trial court) and is not on appeal.

Holding: The defendant did breach the contract by rejecting the last shipment. The terms of the oral agreement were to ship the steel by October and under UCC 2-504 the defendant could only reject the shipment if there was a “material delay.” Because steel takes an average of one month to ship from Europe; although the steel was shipped late, it did arrive by late November so there was no material delay.

Reasoning: The plaintiff and defendant were arguing that they were abiding by what they thought was a written contract. Plaintiff argued for his sales form and defendant for his purchase order form. The court decided that the sales form and purchase order form were merely confirmations of an order because the actual agreement took place through the several telephone conversations. According to the UCC, this means that the “contract” was an integration of the two forms and is made up of the terms that the two parties agree on.

Disclaimers of Warranties (Section 316 of the Uniform Commercial Code).

Implied warranty of fitness for a particular purpose

Can also be disclaimed; but, the disclaimer must be in writing and must be conspicuous. The written disclaimer does not have to mention fitness. This implied warranty does not require a conspicuousness requirement, but most courts agree that one should be implied to carry out the section’s purpose of avoiding surprise to buyers.

Finally, it is important to note that an “As is” magically disclaims all warranties.

To make it easier, you can just remember three elements that are needed to create an express warranty:

Issue: Whether the district court erred in applying the UCC to the contract and whether the jury erred in their award by not observing GE’s final price quotation.

Key Facts: The plaintiff submitted a purchase order (intended to be an offer) to the defendant to perform routine inspection services and repairs on one of its cruise ships. The defendant faxed back its own Fixed Price Quotation which had other terms and disclaimed any liability for consequential damages, lost profits, or lost revenue.
During the inspection, the defendant recommended that the ship be taken ashore for cleaning and balancing. During the cleaning the rotor became unbalanced, which the defendant attempted to correct. The imbalance caused further damage to the ship forcing additional repairs and the cancellation of two tend-day cruises. The plaintiff paid the defendant the full amount of the contract ($231,925).

Procedural History: A jury found GE liable for breach of contract and awarded the plaintiff $4.5 million in damages. Appealing, GE contends that the district court erred in denying its motion for judgment which required the court to vacate the jury’s award of incidental and consequential damages. GE argues that the district court erred because it applied UCC principles, rather than common-law, to a contract primarily for services.

Holding: The contract should not have been evaluated under the UCC because it was a contract for services and the jury should have only considered GE’s Final Price Quotation which restricted damages to the contract price and eliminated liability for incidental or consequential damages, lost profits, or revenue.

Reasoning: First, whether a particular transaction is governed by the UCC, rather than common or statutory law, hinges on whether the contract primarily concerns the furnishing of goods or the rendering of services. Princess’s actual purchase description requests a GE “service engineer” to perform service functions (the contract included incidental parts that were expensive).
Second, the jury should have only considered GE’s Final Price Quotation as the contract. The first purchase order submitted by Princess was rejected by a counteroffer (GE’s first price quotation) which in turn, was revoked and replaced by another offer (GE’s Final Price Quotation. Also, because Princess failed to discuss the conflicting terms of the two contracts, their inaction gave GE every reason to believe that Princess assented to the terms set forth in their final price quotation.

Restatement 19 – “The manifestation of assent may be made wholly or partly by written or spoken words or by other acts or by failure to act.” Under the Restatement, a counter-offer destroys the offer.  The fact that the parties performed evidence that there was an acceptance. The phone call giving GE permission to proceed and that Princess brought their ship in to be repaired. Therefore, Princess intended to accept the last counter-offer by GE. This is called the last-shot rule. Whatever is left on the table is the contract. The only one that really matters is the last contract on the table. If the parties perform, then there is an acceptance.

Judgment: The circuit court reversed the district court’s decision and granted GE’s motion for judgment as a matter of law and remanded to modify the judgment according to common-law and the opinion of the court.

Why it was important to determine whether common law or the UCC applied: Common law only gives us two options in contract formation: Offer and Acceptance or Counteroffer. The UCC gives us a third option: acceptance with additional terms.

Issue: Whether the parties had agreed to an indemnification provision in their contract.

Procedural History: The trial court awarded the plaintiff for the defendant violating the indemnification provision.

Analysis: If this was common law, we would use the last shot rule. However, under the UCC we use acceptance with additional terms (Section 2-207).

Holding: The parties had not agreed to an indemnification provision.

1. Is the contract subject to the statute of frauds?

2. If it is subject, is the statute of frauds satisfied?

3. If it is not satisfied, do the factors invoke one of the exceptions to the statute of frauds?

When the statute of frauds is asserted as a defense against the enforcement of an alleged contract, one should ask the following questions:

1. Is the contract subject to the statute of frauds?

2. If it is subject, is the statute of frauds satisfied?

3. If it is not satisfied, do the factors invoke one of the exceptions to the statute of frauds?

Below is the analysis that should be conducted under the UCC and Common Law to answer this first question, “Is the contract subject to the statute of frauds?”

The UCC presents the easier test as to whether a contract is subject to the statute of frauds. Under the UCC, the only thing we care about is whether the contract is for $500 or more.

Under common law we don’t care about the dollar amount of the contract. Restatement (Second) 110 states that “[t]he following classes of contracts are subject to the Statute of Frauds, forbidding enforcement unless there is a written memorandum or applicable exception:

The majority of these classes are self-explanatory but a few notes on the fifth class, the one-year provision. This class requires a contract not to be performed within one year from the date the contract is made to be in writing. The standard view is that a contract is not subject to the statutory provision if it is possible to be performed within a year, even if the prospect of such performance is remote or unlikely. Therefore, the question you should ask is, “At the time of the formation, could it have been completed within a year?” If the answer is “yes,” no matter how remote or unlikely it is, then most courts will deem that the contract fits this class and is not subject to the statute of frauds. Something to remember is that many courts are looking for reasons to exclude things from the statute of frauds.